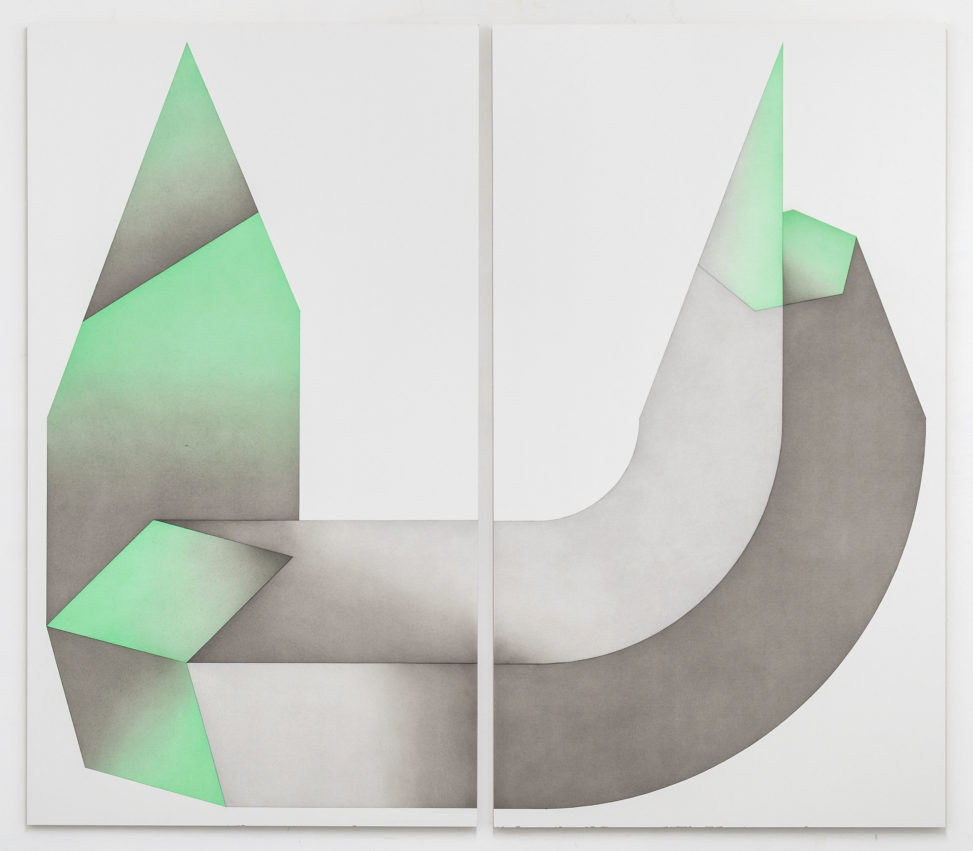 Your research is based on the obsession for perfection that has geometry as its guiding principle in so far as it’s a creative act. Could you explain and analyze this concept for me?

Perfection is a failing principle. But despite this, what interests me is the tendency for potential, the inclination towards an attitude.

Each single work is the result of a mathematical-linguistic study, with numbers and geometry in some cases you can affirm that a determined preposition is true and false at the same time, in a total aperture of meaning that has always fascinated me.

Trying to reach the infinite, expressing everything, being able to draw all things and make the incomprehensible visible with a few basic elements, totalizing forms that hold within essence and essentiality.

Obsession—well, you can’t explain that.

With geometry you tend to achieve a universal language. Could you elaborate on this idea of yours?

The magnetism geometric forms exert upon man has always been studied. Just consider the presence of the triangle as a divine symbol in all religions, traditions, and philosophies. And yet, we can’t describe the reason with any precision.

I try to analyze the relationship between people and the world from various viewpoints, especially regarding space. Everyone occupies some, thus creating an intentional discard of meaning, a set and subset in mathematical terms. We are indeed an extension.

Geometry, the art of measuring, not only reveals spatial quantities, but is, in its own right, a universal language, a channel of the reproduction in visual form of notions like numbers in accord with the principle and archetype of creation, as the ancients teach us: Pythagoras, in the treatise titled “Sacred Discourse,” states there are four paths to Wisdom: Arithmetic, Geometry, Music, and Spheres (or Astronomy); or Plato in the “Republic” states “directing the soul towards the Truth, and giving birth to the scientific spirit, which elevates our gaze towards superhuman things instead of focusing it, as we do, on earthly things.”

So I look for contact with the divine through sort of transcribing the earthly image in the heavenly world, studying the numerical and proportional structure of those things that relate to me, even for just a fleeting moment—be they objects, places, or characteristics.

The secret desire to create a universal visual language that can translate systems and relating measurements, to be able to control one’s emotions and extravagances with atemporal memory. 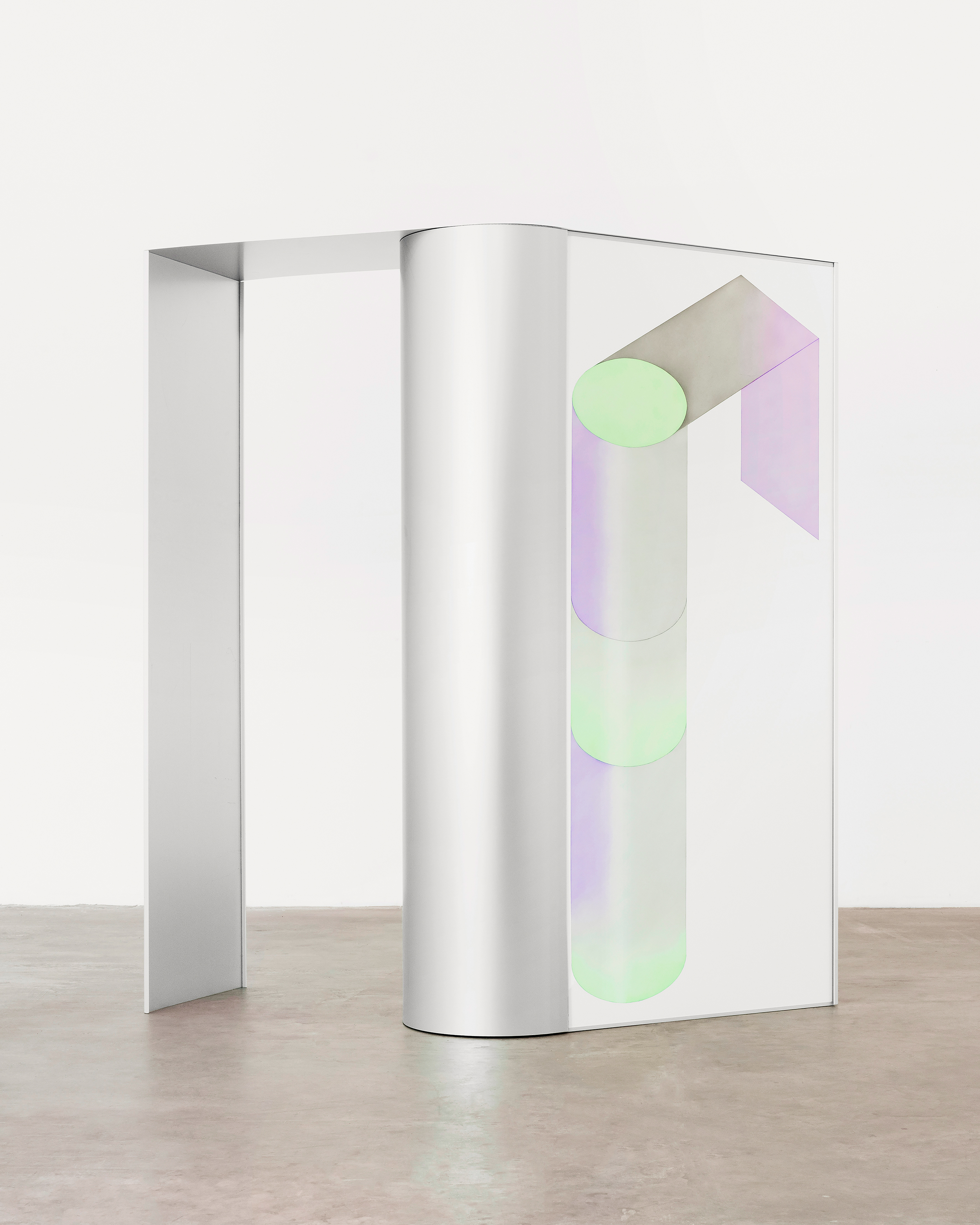 What do you mean when you discuss Images-Objects?

All my research tries to have the greatest coherence regarding various aspects: I start with a concept. I study its numerical-visual resolution. I choose the medium that can best express the idea.

Even the technical formalization becomes part of the work in a constant transcription of a conceptual process.

The need to coin a new term to name my works is an attempt to stress my analytical approach towards things, situations, emotions.

The idea of offering a different vision of a place—for example, many of my projects are site-specific even if they are paintings, almost as if it were possible to create a new axis on the Cartesian plane or a new real dimension—starts with making an image, obviously if we mean visual art, where however objective specificities, like the measurements and the proportions that exist between the space of display and the work itself have a fundamental value in understanding that work. 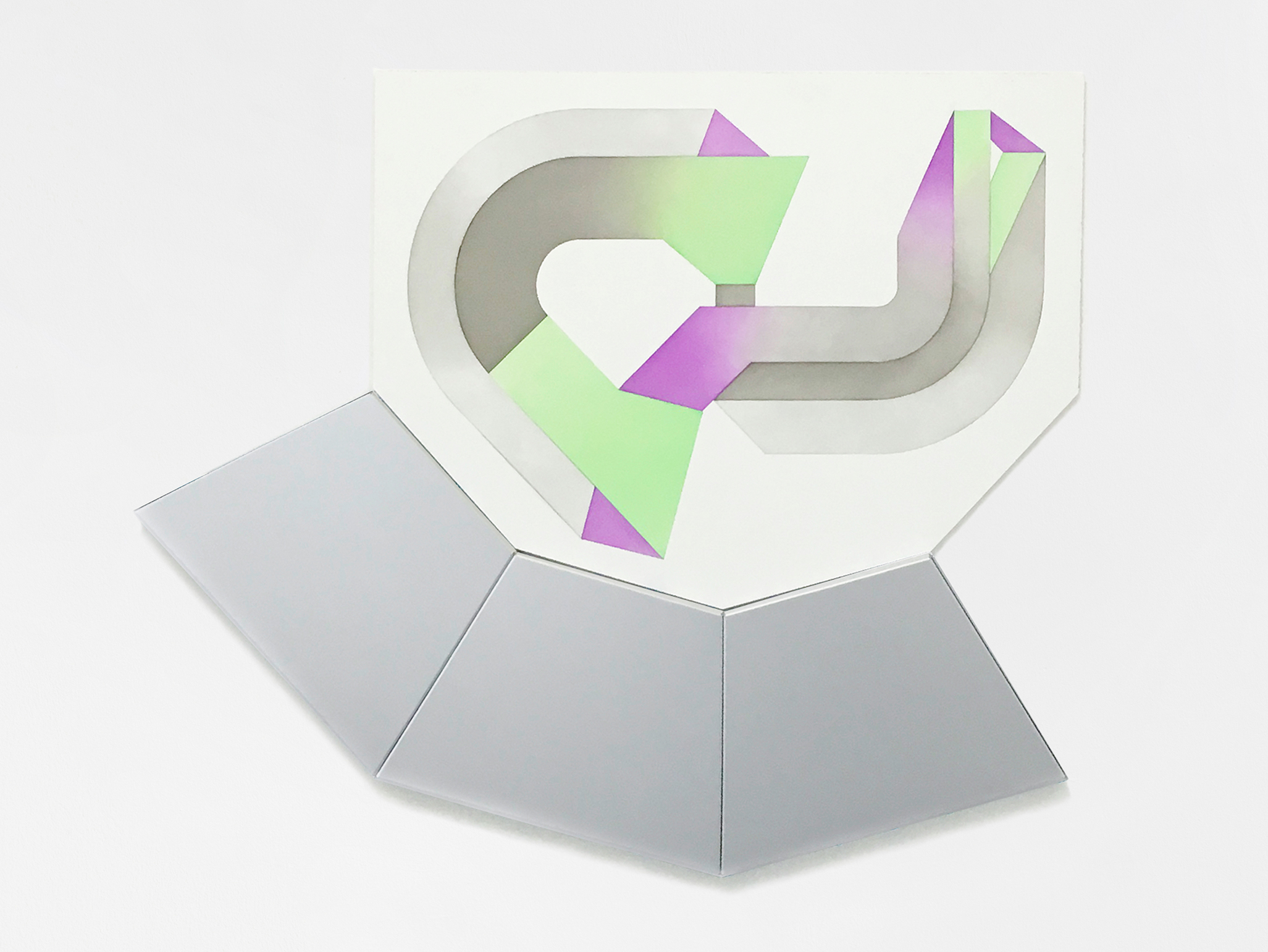 Based on what you’ve just explained, how do you relate with the space surrounding you? Many of your works are orthogonal or isometric projections. They reread reality, they are forms that overturn space, where two and three dimensionality join in a single work. Can you explain?

Every time I enter a space I try to understand the hypotheses of meaning hidden behind those entities that we normally call “dimensions.”

Using technical drawings and rules of descriptive geometry I analyze the possibilities of representing the area in question. I look for new forms hidden in the architecture layout, where, all in all, two-dimensional drawing coincides with the tridimensional.

The key question is: what happens if I shift the viewing point at the precise place where the axes relating to the representation of this place meet? And, as regards Euclidean geometry, is there a possibility of portraying this third dimension only with a ruler and a compass? Or still, can I outline an extreme synthesis of these numbers and areas by treating the map as if it were just a unit of pure geometric forms?

I start from the drawing, always; a sort of meditative mantra that allows me to become part of the dimension I’m analyzing.

At times, the development is pictorial, with exasperated antithesis. I have elaborated a technique that almost allows me not to leave traces of my acts. I don’t want to be present in a work in personal terms, even though, obviously, the work itself is part of me; at other times, I use sheets of aluminum which allow me to draw as if they were paper, and then integrate the result with a sculptural approach.

The use of aluminum is tied to a three dimensional practice, but also to painting and two dimensions. The metal reflects or absorbs light, depending on the workmanship I choose. In any event, it’s always gray and, at the same time, it is in synch with the colors surrounding it, including the viewers.

You define your work as “empirical” and “with sentimental impulse.” These are odd adjectives for conceptual and geometric poetics.

For me, everything is a channel of the loving need found between the variant and the rule, though limiting yourself to observing events while inventing your own tools and own rules.

Geometric modules and proportions go beyond the construction and compositional technical objectives. They are an emotional architectural synthesis.

The invisible idea of grasping the function par excellence in an automatic and regulated process, almost as if it were (and the possibility is obvious) intrinsic to the process, the image of that very process.

Obliging a geometric form to one’s own interest by freezing and withholding the dynamic gesture that is very often a sentimental encounter of minimal acts, a love for all things, in a silent act.

You give particular value and meaning to colors. Can you explain which?

Almost always my palette is reduced to a single pair, purple and green, opposed yet complementary extremes, the yin and yang of a personal pattern, even if, all in all, I’m expanding this to blue, the intersection of the first two colors, the color of night that erases. I don’t like going to sleep. I’ve always been a night-person. Darkness is the connection to Heaven-Universe-Energy.

In the past, I used gold in this sense, with explicit references to ancient traditions.

And then there’s gray.

The color of shadows, for me it corresponds to the silence in music, a pause, a breath, an opening to the three dimensional and the total sum of color possibilities.

What significance does rhythm have in space?

There’s a direct link between the words order and rhythm (from the Greek rythmòs), so a system of norms that regulate the composition and correlated elements, like for example a geometric matrix that is chosen and repeated, leading to the proportionality of space.

The project I’m working on, a new series of small painted Images-Objects, which will soon become three dimensional, is an exploration of the spatial rhythm that exists on my face.

It’s well known that specific proportions inside the human body exist. The most classic example is the golden section and the resulting theoretical (and non-theoretical) applications, but in this case my consideration derives once again from a query: which is the only part of my body that I’m never able to see, if not in reflection? What kind of space does the reflection of a “space” occupy?

For a series of reasons I felt the need to work directly on the “territory” I invade every day, that is, my face, scrutinizing better the space that exists between my eyes, the sensory organs of sight, of perception, of judging.

A series of self-portraits that mark off the definitions of what I call Space, even though I can’t observe it. 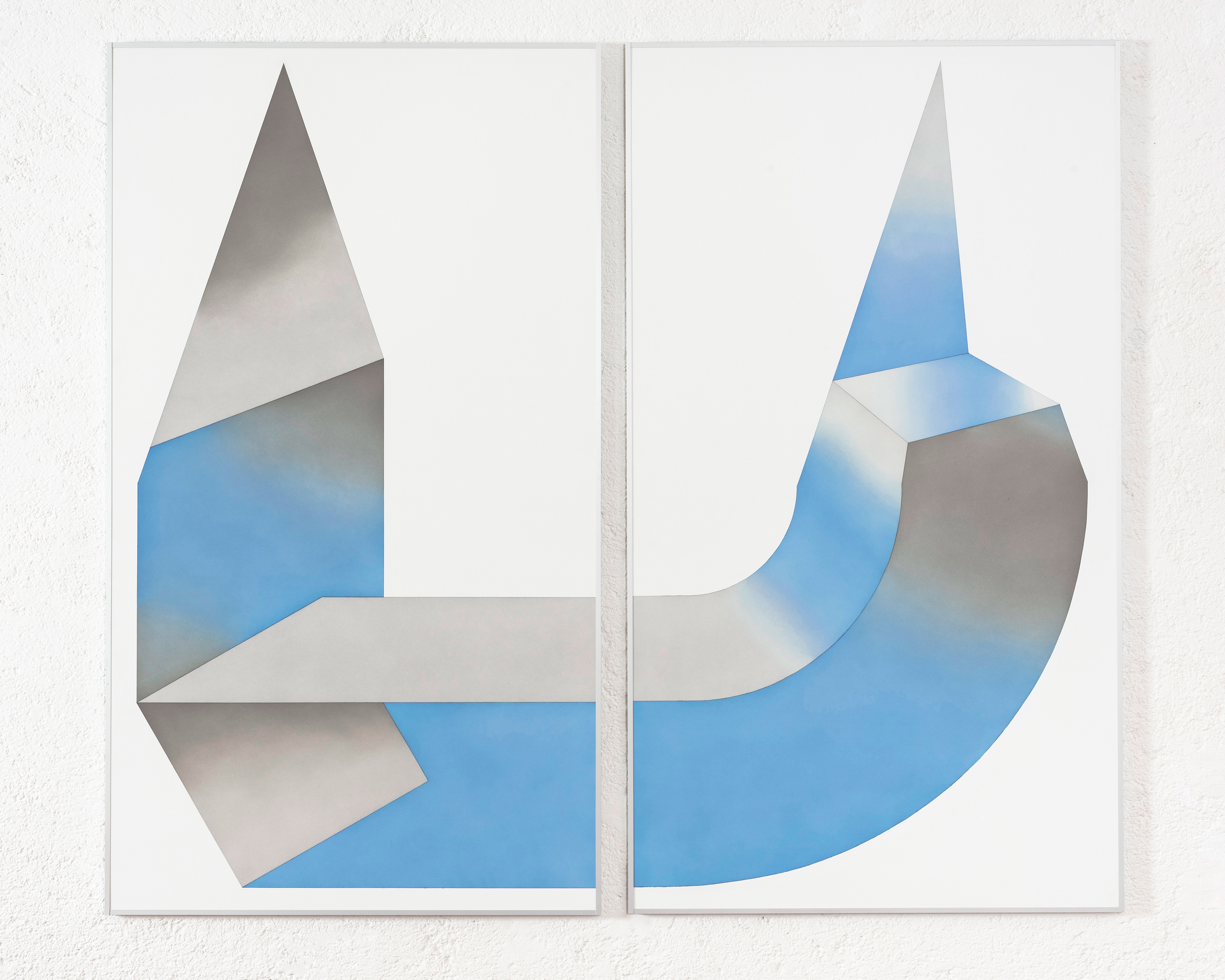 You live in Milan and New York. What differences are there in these two art systems?

If the world is small, the art world is minute.

New York is a stimulating and destructive city, all at the same time; as regards the system, the offer is vaster and interest in something new is always present.

Here, the idea of rivalry constantly shifts one’s limits, and so you have to think quicker.

The market has various levels that intersect and overlap, the usual complex question, but only in economics books.

You recently finished a residence at the NARS Foundation in New York. Can you say a few words about this experience?

I was chosen for this international program. I had the chance to meet other artists from all parts of the world and with research that is totally different from mine. NARS is an actual community where the staff, right from the start, studies the work of each artist to offer a diversified network that allows you to expand your contacts in a targeted way.

Every week there are studio visits with critics, curators, gallery owners from key sector institutions in New York and abroad.

I was also very pleased with the Open Studios and obviously the exhibition that we created, step after step, in which I presented two new site-specific works.

An experience that surely enriched me on a professional and personal level. 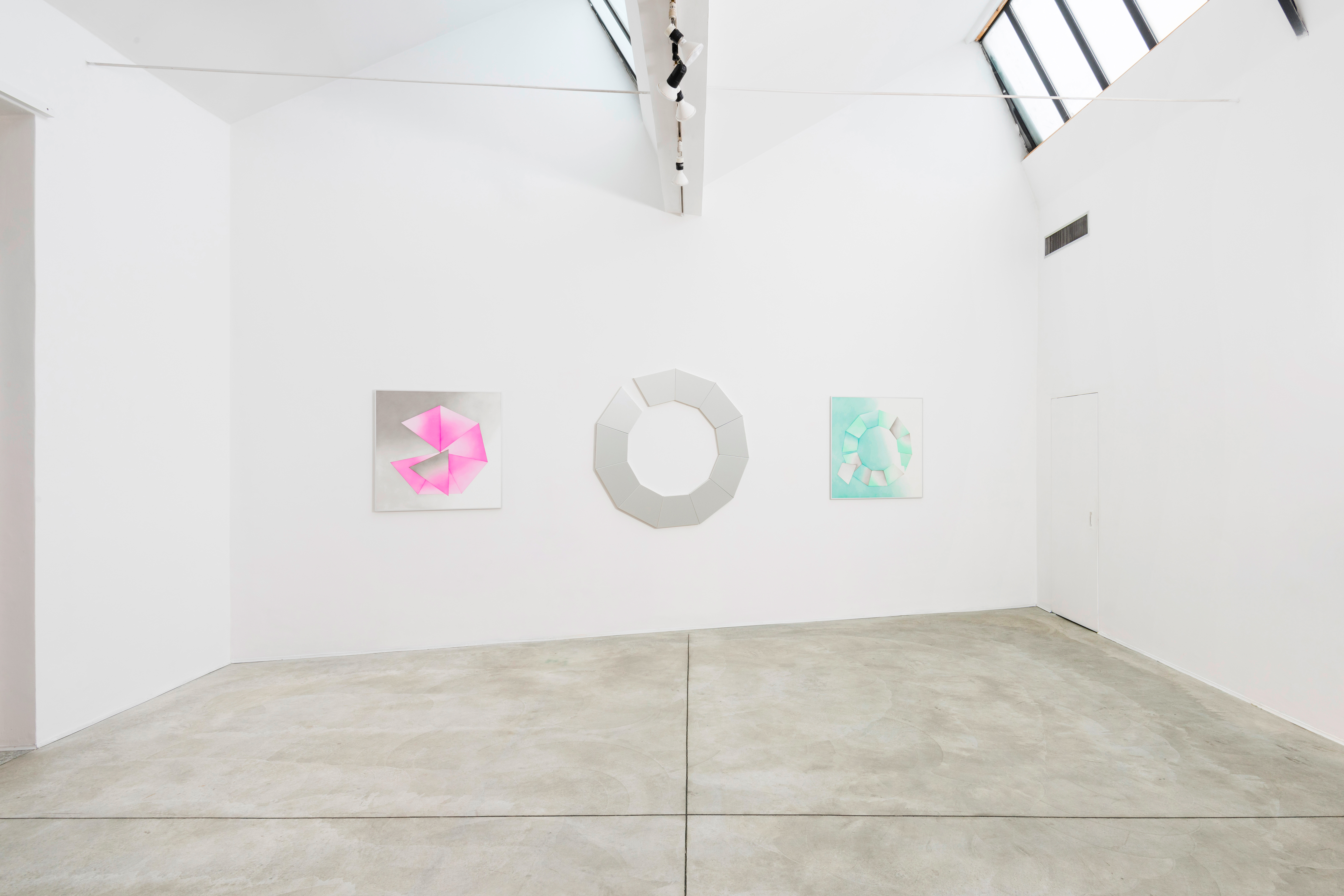